Last week, there were rumors that the Ministry of Finance would initiate lawsuits against money laundering institutions through cryptocurrencies.

Farmers in most states expect a major drought, which will reduce crop yields and further increase food prices.

Real economic conditions are deteriorating, thousands of small towns have gone bankrupt, unemployment is huge, but the Federal Government is still spinning that the economy is up and running and the inflated stock markets are showing all the lies of the wrong economic policy.

Compared to last year, the increase is 16%.

The Greens, the left, and the Social Democratic Party’s plan to increase the wealth tax, which will bring in 25 billion euros a year, which is 0.3% of the national debt.

The unemployment rate for the first quarter – 4.9%.

The Swiss banking system is five times larger than the country’s economic output.

The Swiss central bank is the largest hedge fund in the world with 1,100 billion dollars or 145% of GDP.

It is estimated that Credit Suisse alone lost 20 billion dollars in a few years.

The US government has accused the Swiss central bank of speculating in foreign exchange financial markets but is still not acting against Switzerland and Vietnam, which is behaving the same way.

Draghi is launching a strategy of the largest borrowing in the EU, to get Italy out of the crisis. 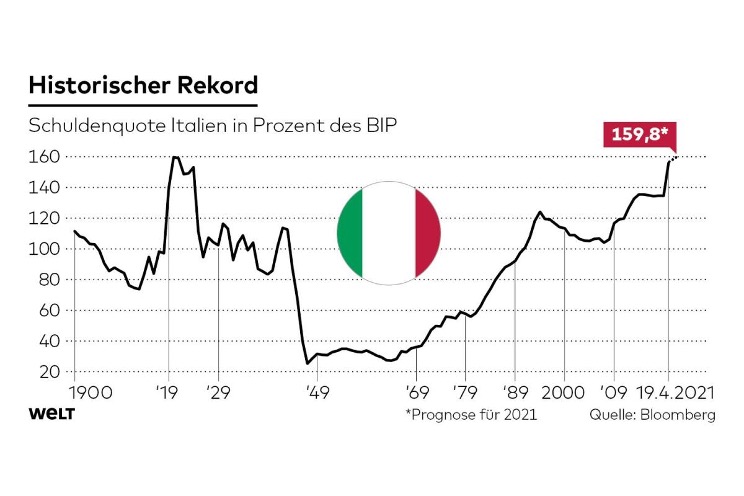 Draghi admits to gambling because that is the only way to save the Italian economy.

The European Central Bank analyzed the balance sheets of 65 large banks and it was determined that there is no coverage for 275 billion euros of risky assets in banks.

ABN Amro Bank has to pay a 480 million euro fine for violating the money laundering law.

Gold is extremely undervalued, both in terms of basic raw materials and

The reason for growth could be found in the fall of the dollar and higher orders.

India is preparing a ban.

USA – increasing pressure from the state on institutions that trade cryptocurrencies.

Will other countries follow the same path, to protect the monopoly of fiat money?

The decline is due to big speculations because many investors are investing from loans.

As long as there are new buyers, prices are inflated.

When there are no new buyers, prices fall quickly.

That is the “pyramid bank” model.

Dogecoin rose 220 times in a year.

The Coinbase platform became public for the first time and its estimated capitalization of 100 billion dollars is higher than the total number of most world stock exchanges.