The trade deficit increased in April to $ 74.4 billion.

Over 34% of U.S. revenue comes from the Federal Government budget.

Zombie citizens and zombie companies are being created.

Every hour $100 million is injected into the diseased system.

That is not serious for a banana state either.

In the first quarter of 2021, the NIO electric car factory recorded an increase in sales to 20,060 vehicles, which is an increase of 422.7% compared to last year.

The company is preparing to attack the European market because it has a growing demand from Europe. They are preparing to open a factory in Oslo, Norway.

The Credit Reporting Agency expects 35,500 bankruptcies of companies this year if the state does not help them.

In 2019, China bought 60 tons of gold per month, in 2020 that was 10 tons per month, but the Central Bank of China approved large import quotas for the purchase of gold.

The economy is recovering, and gold is being bought as a stabilizing value.

India and China buy 40% of all gold purchases a year. 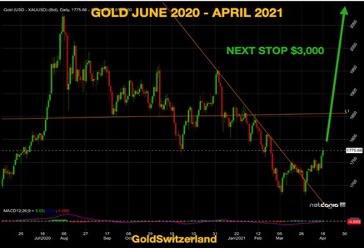 The largest investment fund in the world, Black Rock, announced that it is not interested in the crypto market, that they follow what is happening in that market and its investors do not invest in crypto markets, that they are more worried about climate change and rising inflation.

The crypto bubble inflates and reaches 2.264 billion dollars, with a day jump of 0.17%

The Deputy Governor of the Central Bank of China spoke positively about bitcoin and its prospects. China does not allow investing in bitcoin as an asset. They wanted to regulate the domestic cryptocurrency market, and when they finish that, then they are ready to open trading for other cryptocurrencies.

The founder of PayPal is a fan of cryptocurrencies, especially Bitcoin, but warns the American public that a large influx of Chinese investors into Bitcoin could lead to the collapse of the dollar and undermine the American financial system.